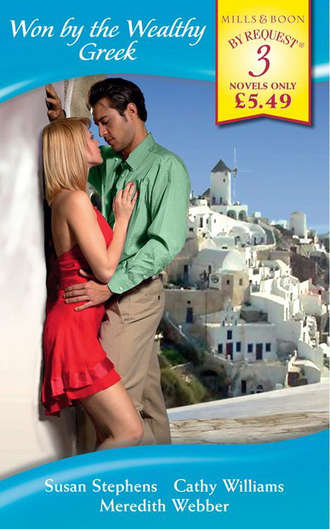 The Greek’s Seven-Day Seduction by Susan Stephens On holiday on the Greek island of Iskos, Charlotte encounters gorgeous Greek Iannis Kiriakos and can’t resist the sexual current flowing between them. But when Iannis discovers she’s a journalist and has been writing about him, he decides to take a slow, pleasurable revenge…Constantinou’s Mistress by Cathy WilliamsWorking late one evening with her Greek tycoon boss Nick Constantinou, Lucy Reid got swept away and they’d ended up making love! Once Nick knew of her passion, he could think of nothing else and seduced her all over again… But Lucy had bombshell news…The Greek Doctor’s Rescue by Meredith Webber Nik Conias dedicates his life and his wealth to one thing, his aid organisation…until he meets Ellie Reardon. Nik’s charm and Greek good looks make him almost impossible to resist, especially now they are working side by side, saving lives together.