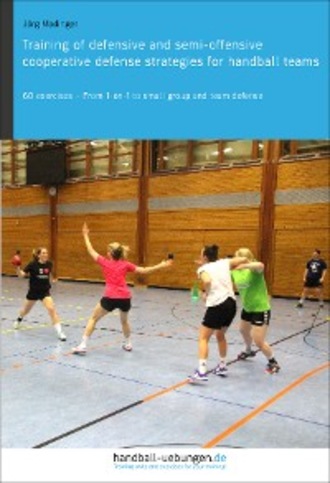 A good defense is a prerequisite for modern team handball. The intention is not only to prevent goals but also to actively win the ball and subsequently initiate a fast attack. The offense should permanently be put under pressure and forced to make mistakes. <br/> The exercises in this collection initially deal with the individual basics of defense play. Individual and position-specific training marks the starting point for subsequent cooperative defense play and allows for choosing the appropriate defense system. The basics both include exercises on legwork, 1-on-1 defense and covering the pivot in combination with fast adjustment to subsequent actions as well as blocking and anticipating on the wing positions of a proactive defense system. <br/> The second part of the collection deals with cooperative small group defense play and focuses on handing over/taking over attacking players along the defense line (width of defense) and on making agreements when defending against the pivot. <br/> The third chapter introduces cooperative team defense in 6-0, 5-1, 3-2-1, and 4-2 defense systems along with possible variants. <br/> Get inspired by the exercises, develop your own defense concepts, and make use of the individual strengths of your defense players for optimal cooperation.