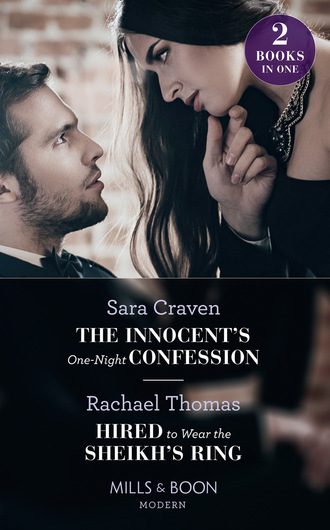 The Innocent’s One-Night Confession by Sara CravenOne night with Zandor marked Alanna as his…Now he’s returned—to claim her for ever! Zandor awakened Alanna to an unknown sensuality! Overwhelmed by her response, she fled, never expecting to see him again. But when he shockingly reappears in her life Zandor’s charisma reminds her of the heat they shared. And this time she can’t run from the sizzling intensity of their connection…Hired to Wear the Sheikh&apos;s Ring by Rachael Thomas‘I want to hire you – as my bride.’Until she makes him want more…Tiffany is the perfect candidate to be Jafar Al-Shehri’s temporary wife. In return for meeting him at the altar, he’ll clear her sister’s debt. Yet this convenient arrangement to secure his crown soon leads to unbridled passion! But Jafar’s throne is still at stake – is their craving for each other enough to make Tiffany more than just the Sheikh’s hired bride…?