Special Deliveries: Her Gift, His Baby: Secrets of a Career Girl / For the Baby's Sake / A Very Special Delivery. CAROL MARINELLI и др. 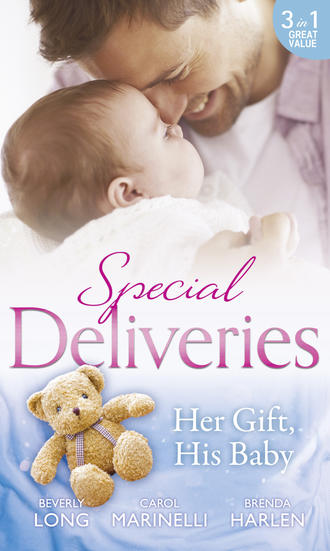 Secrets of a Career Girl by Carol MarinelliWith the same work ethic that made her a registrar, Penny is determined to start a family. She’s come to terms with having IVF alone, but the biggest obstacle is keeping it a secret from her persistent boss, Consultant Ethan Lewis.Penny thought it was her hormones making her hyper aware of Ethan’s dark eyes and sexy smile, but as she confides in him, she realises it’s their sizzling chemistry!For the Baby’s Sake by Beverly LongDetective Sawyer Montgomery never makes the same mistake twice. Burned in the past, he’s learned to stay guarded when a beautiful woman’s involved. Problem is, getting the key testimony to close a case requires a hands-on approach, because strong-willed counsellor Liz Mayfield—and the desire between them—is quickly getting under his skin.Now that his witness, Liz’s client, has suspiciously vanished, joining forces and taking to the road in order to save the pregnant teen’s life is their only option. But it soon becomes clear that the danger targeting Liz places her in need of protection. Sawyer's protection. And that this unexpected complication will test every fiber of Sawyer's legendary self-control…A Very Special Delivery by Brenda HarlenBeing trapped in a strange town in a freak blizzard is scary enough, but Julie Marlowe just went into labor in someone's driveway! Lucky for her, a handsome stranger came to her rescue. Several hours later, Julie was the proud mother of an infant son …and in danger of falling for the sexy vet who delivered her baby!Lukas Garrett didn’t know how much he wanted to be a father–or a husband!–until he helped bring Julie’s little boy into the world. Now mother and child have grabbed hold of his once-guarded heart. But Julie’s past could derail her future with Luke, unless she's willing to trust her heart to this man for the chance to have the family of her dreams . . .