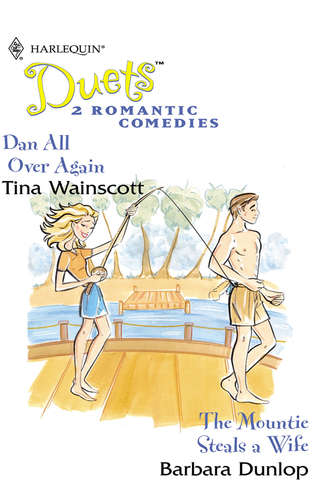 Dan All Over Again by Tina WainscottThe catch of a lifetime…Cassie had reeled Dan the fisherman in once before, but panicked at the first mention of babies and joint bank accounts. He thought the divorce from Hurricane Cassie had settled things once and for all. But now he's longing to test those stormy seas again. Trouble is, if he hooks her, will he be brave enough to hold on to her, or will she be the one that got away?The Mountie Steals a Wife by Barbara DunlopThe assignment of a lifetime…Melina Thurston had promised herself that she would not fall for her handsome houseguest in the red suit. She's only supposed to be training her horses, not showing some city boy how to get along in the wild. Logan Maxwell is with the Yukon detachment only temporarily to help solve a recent gold theft. And though at first he suspects his beautiful landlady, he soon realizes he has an even bigger problem-he's fallen for her and there's no getaway plan in sight!