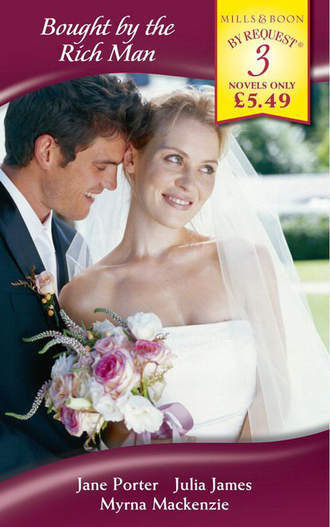 Taken by the Highest Bidder by Jane PorterSamantha van Bergen has been won by the highest bidder: dark and sexy Italian racing driver Cristiano Bartolo. Virginal Sam suspects Cristiano will seduce her! But she quickly finds out he has another reason for wanting her – bedding her is just a bonus!Bought by Her Latin Lover by Julia JamesSpanish millionaire Cesar Montarez wants Rosalind the moment he sees her. But Rosalind is determined she’ll never be his, until Cesar discovers that she has secret debts. Now he can buy her – and Rosalind must pay his price! Bought by the Billionaire by Myrna MackenzieWhen Ethan Bennington told cleaner Maggie that he could transform her into a society lady, she thought he was crazy. But one look into his amazing eyes and she was willing to try anything for the sexy billionaire…