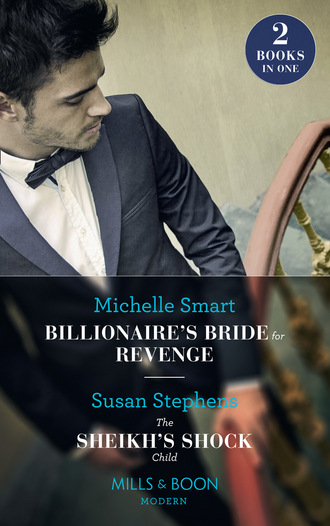 Billionaire’s Bride for Revenge by Michelle SmartA billionaire seeking retribution…A bride stolen for revenge!Billionaire Benjamin has the ultimate plan for vengeance on those who betrayed him: steal his enemy’s fianc?e, Freya, and marry her himself. It’s meant to be a convenient arrangement, yet the cool, collected prima ballerina ignites a passion in his blood! There’s nothing remotely convenient about the red-hot pleasures of their wedding night—and Benjamin is tempted to make Freya his for more than revenge…The Sheikh’s Shock Child by Susan StephensOne passionate night…One shocking consequence!Working aboard Sheikh Khalid’s luxury yacht, innocent laundress Millie hides in the shadows—until she succumbs to his touch. Overwhelmed by the intensity of their encounter, she doesn’t even realise his yacht has set sail—and soon she finds herself between his golden sheets! But becoming Khalid’s mistress isn’t the only consequence of their reckless desire…and Millie’s scandalous news will bind them, permanently!